Carly and John didn't really have a theme for their wedding, but elegance and sophistication was their goal.

They chose Gaynes Park as it has everything they wanted. The country setting, the beautiful surroundings, the stunning buildings and the beautiful orangery.

I knew Gaynes Park was it, the minute we arrived. We had been to see 6 or 7 beforehand, but didn’t get the butterfly feeling I had when I arrived at Gaynes Park. Immediately John and I started to talk of plans and what we could do and we both knew this was it. The venue as a whole was just so pretty we couldn’t resist.

They booked the venue just over a year in advance.

“The venue as a whole was just so pretty we couldn’t resist.”

Carly had 4 bridesmaids. Bea who was only 6 months wore a grey and white dress, with white booties and a white cardigan all from Selfridges. Luella, Gabrielle and Jodie all wore grey dresses from Joseph with gunmetal grey shoes from Kurt Geiger. They held tight balls of gypsophelia with diamantès sprinkled through.

John wore a tailored navy blue suit by Chris Kerr. The best man and ushers all wore hired grey suits from Moss Bros. They wore white shirts and grey ties bought from House of Fraser and had gypsophelia button holes with diamantè detail.

Carly’s dress was by Amsale, an American designer. It was Alencon lace at the bust with satin detail waistband and a silk organza bottom. The back of the dress was low with tiny spaghetti straps. The top of the dress was off white and the bottom was in an almond colour.

They sparkled a lot!

The main flower in Carly’s bouquet were peonies. She wanted elegant flowers so decided that roses in very soft pink would compliment the peonies. They were put together by some green foliage.

Carly travelled to Gaynes Park in her Dad’s car! They arrived at the venue just after 11am as this is where she got ready. Carly got ready in the Apple Loft cottage with her Mum and Dad and bridesmaids. Their guests were picked up from the Marriott hotel and brought to the wedding on 2 large coaches. John arrived with his best man and 7 ushers in their own transport.

The room was decorated completely with flowers. They put 2 large candelabra either side of the ceremony table in the orangery where they got married and filled the table with flowers. In the main barn the centrepieces were tall thin vases filled with pink and cream orchids and LED lights. The flowers were peonies and roses in cream with a hint of pink. They were finished off with grey ostrich feathers to tie in with the girls and boys attire.

For favours, the boys were given miniatures of brandy, gin, vodka and Baileys. The girls were given lip balms made by a family friend. They were in grey pots with a personalised label on them saying John and Carly Farnsworth 3.5.9. We had 6 children who all got an activity book with pencils.

They opted for an M&S 3 tier round wedding cake. Carly bought some velvet ribbon in grey to decorate and the florist decorated the top with ostrich feathers and cream peonies. It was sponge with cream.

John and I are both in total agreement that the actual marriage was the best part of our day. For me – the walk down the extremely long outdoor aisle with my sisters, best friend and Dad was brilliant.

“John and I are both in total agreement that the actual marriage was the best part of our day.”

We made the best decision ever in not having a photographer that wanted to take us off for an hour to take posed shots. John and I were both in agreement from the start that we wanted natural shots of the day. Damian Bailey, our photographer offered just that. Our drinks reception was so lovely that I would have hated to miss any of it. We actually got great shots of us together naturally, with friends and family. 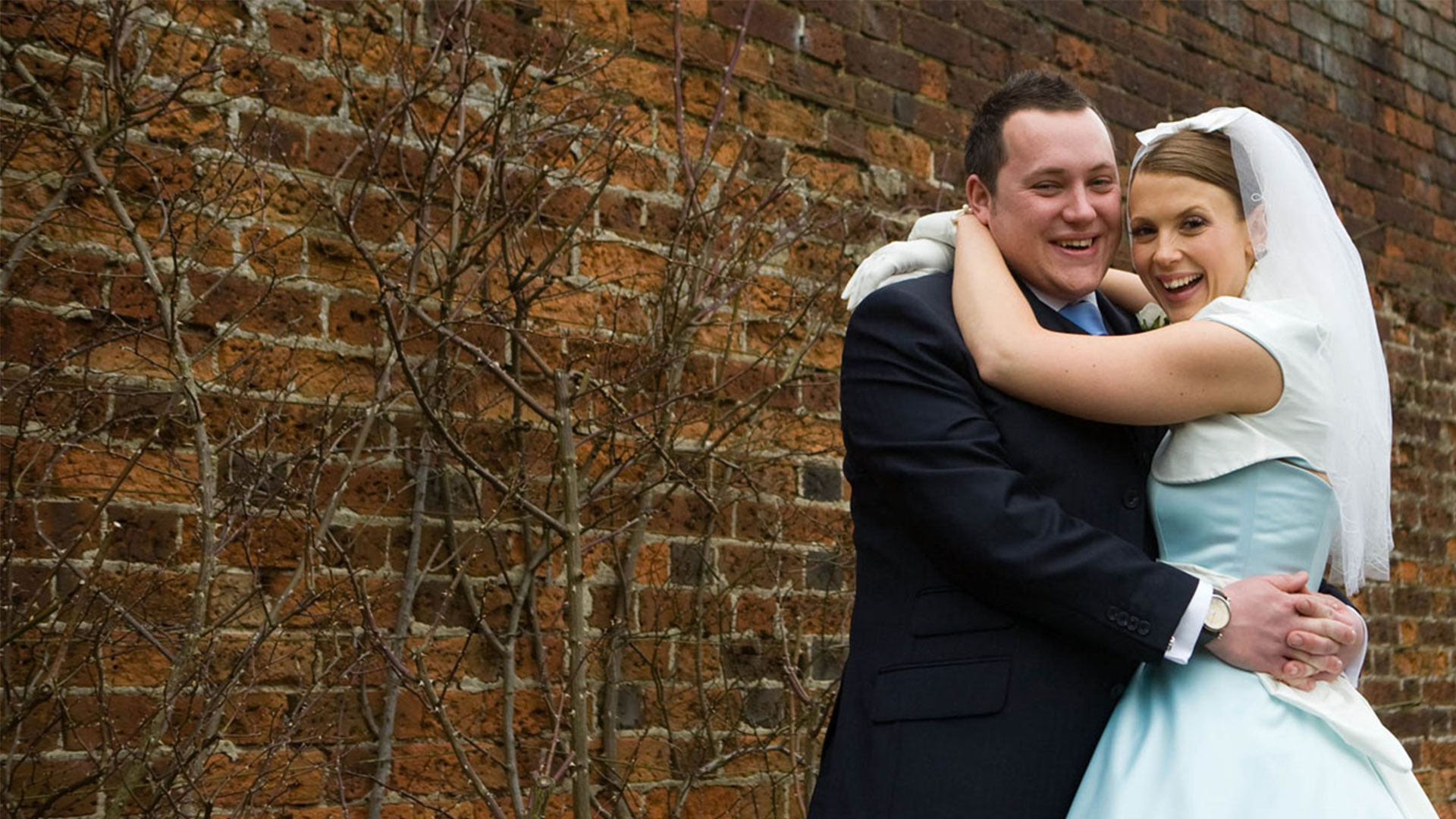 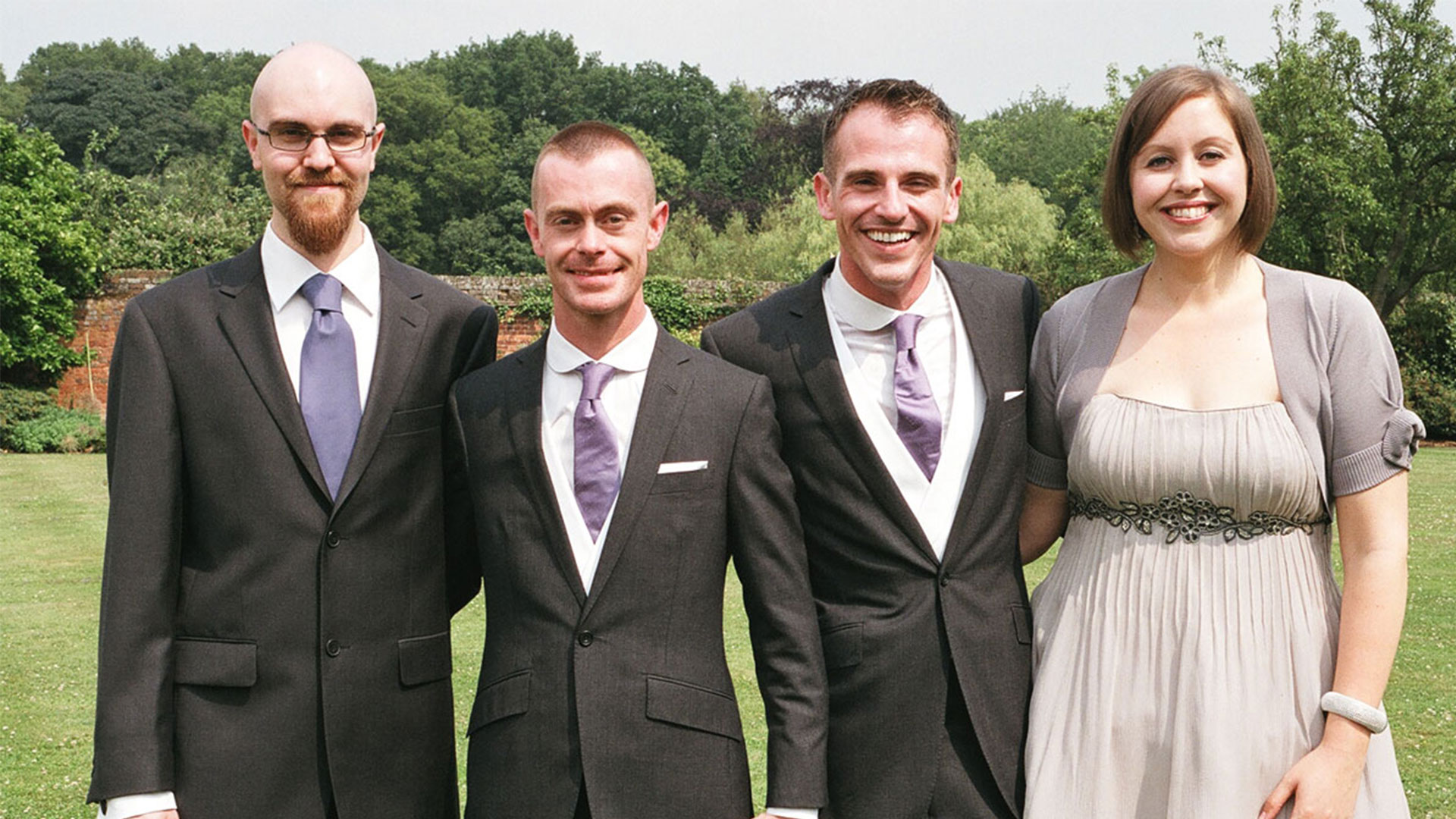