Mitra and Elliott dated for five years so they have had lots of fun, memorable times!

Elliott’s proposal was a complete surprise.

“We were on a family skiing holiday and, as I had no idea what he was planning, I signed us up for back-to-back ski-school sessions and family activities! On the very last day we finally found ourselves on our own for the first time, sitting on deckchairs, bathing in glorious sunshine, at the foot of the Matterhorn. Elliott got down on one knee (tricky in ski boots) and asked me to marry him. It was the perfect moment and neither of us will ever forget it!”

Mitra and Elliott had their ceremony and reception at Gaynes Park. They chose it because it is close to London and easy to get to on the Tube, whilst still being in the countryside.

We thought it was spectacular. The Orangery, where the service took place, was bright and airy and provided a beautiful setting for photos in case of bad weather, which luckily we didn’t have! The reception was held in the converted Mill Barn and we had the whole venue to ourselves all day.

The food was out of this world – lots of our guests commented on it. It’s such a shame that I was so overcome with everything that I barely ate a thing! We had a blue cheese tart to start, chicken and chorizo for a main and a lemon posset for dessert.

Mitra’s best friend from school, Sarah, was her bridesmaid.

Sarah wore a gorgeous 60s style shift from Coast that complemented the style of Mitra’s dress, and the colour matched perfectly. Instead of a bouquet she wore a beautiful wrist corsage and burnt gold coloured shoes from Nine West with matching bag.

“I knew I would bore Sarah with all the details of the planning stages and ask for her advice through the whole process, so thought she would be the best person!”

Elliott got a bespoke suit made, which he organised and chose himself.

He kept all the details about his suit a secret, as I wouldn’t tell him about mine! I just found him a matching tie.
The suit was a very dark navy, slim cut with two buttons.

He looked amazing when I saw him – so smart and stylish.

Mitra’s dress was from Candy Anthony. There were 4 layers of mint green petticoats underneath, with a wide turquoise sash tied into a big bow at the back.

I knew that a traditional, long white gown wasn’t for me so when I saw the colourful 50’s style dresses in her shop that was it! I think Elliott was quite relieved when he saw me, because there had been lots of brightly coloured swatches of material floating around so he was worried I was going to be dressed head to toe in Day-Glo … and meanly, I hadn’t corrected him! Everything about it was amazing! I twirled around like a little girl when I first put it on! I felt a million dollars!!

I loved these almost as much as my dress, and was amazed that I kept them on all day and night!

Mitra also wore a flower in her hair and sparkly earrings which she found at Spitalfields Market.

Mitra travelled with her mum, dad and bridesmaid in a 1940s style taxi. It looked lovely and luckily fitted all of them in, including Mitra’s dress!

Mitra and Elliott used milk jugs for their centrepieces, which were filled with flower arrangements that included hot pink gerberas and tied turquoise ribbon around each one.

Each jug of flowers had a tag attached and we gave them away as a gift to one person on each table. I didn’t have a fixed idea for my flowers, so I asked the florist for something colourful and natural looking. She understood exactly what I wanted and recommended hot pink gerberas with eucalyptus and a selection of other flowers, which I absolutely loved.

We were lucky to have a beautiful venue that didn’t need much decoration.

Instead of a traditional cake, each table was served with an individual bright pink cake stand of homemade brownies made by Mitra’s mum, whose baking skills are legendary! These were accompanied by Krispy Kreme doughnuts at the insistence of the groom.

The ceremony was my favourite part of the day – walking down the gravel path at Gaynes Park was really magical, and making the vows was such a special experience. When I saw Elliott standing with the registrar, my heart melted and it dawned on me that this was it, we were going to be married! My dad walked me down the aisle, and we had two readings by friends. We walked out to Don’t Stop Believing, sung by Glee, which I still can’t believe Elliott agreed to!

Remember that it’s all really about two people getting married; other details are fabulous but they are just details! Do whatever makes you feel comfortable and confident so you can focus 100% on enjoying the day.

For the groom, I’d say, get involved in planning decisions at least a bit to make sure you get what you want from the day.
With regards to keeping to a budget, always negotiate cost. It can feel uncomfortable but it’s worth it if you do have a budget to keep to.

We moved house 4 weeks before the wedding, which was an incredibly busy time and put everything into context, particularly financially. We looked forward to the wedding just to have a rest!

“Think, ‘did I remember that at other weddings I’ve been to?’ If the answer is no, it may be worth leaving it out. Decide on the elements that are most important to you; splash out on them and be ruthless with everything else.” 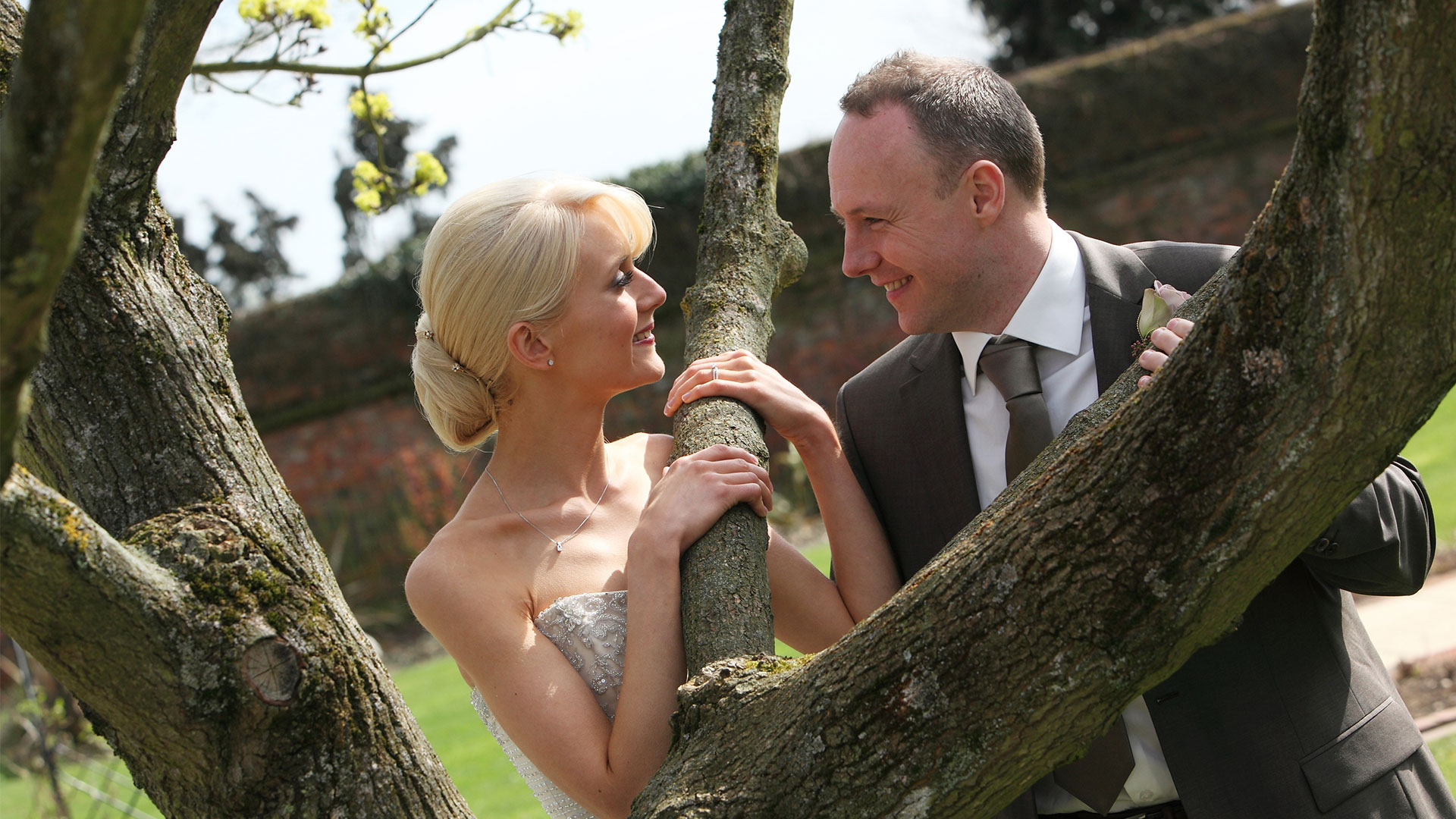 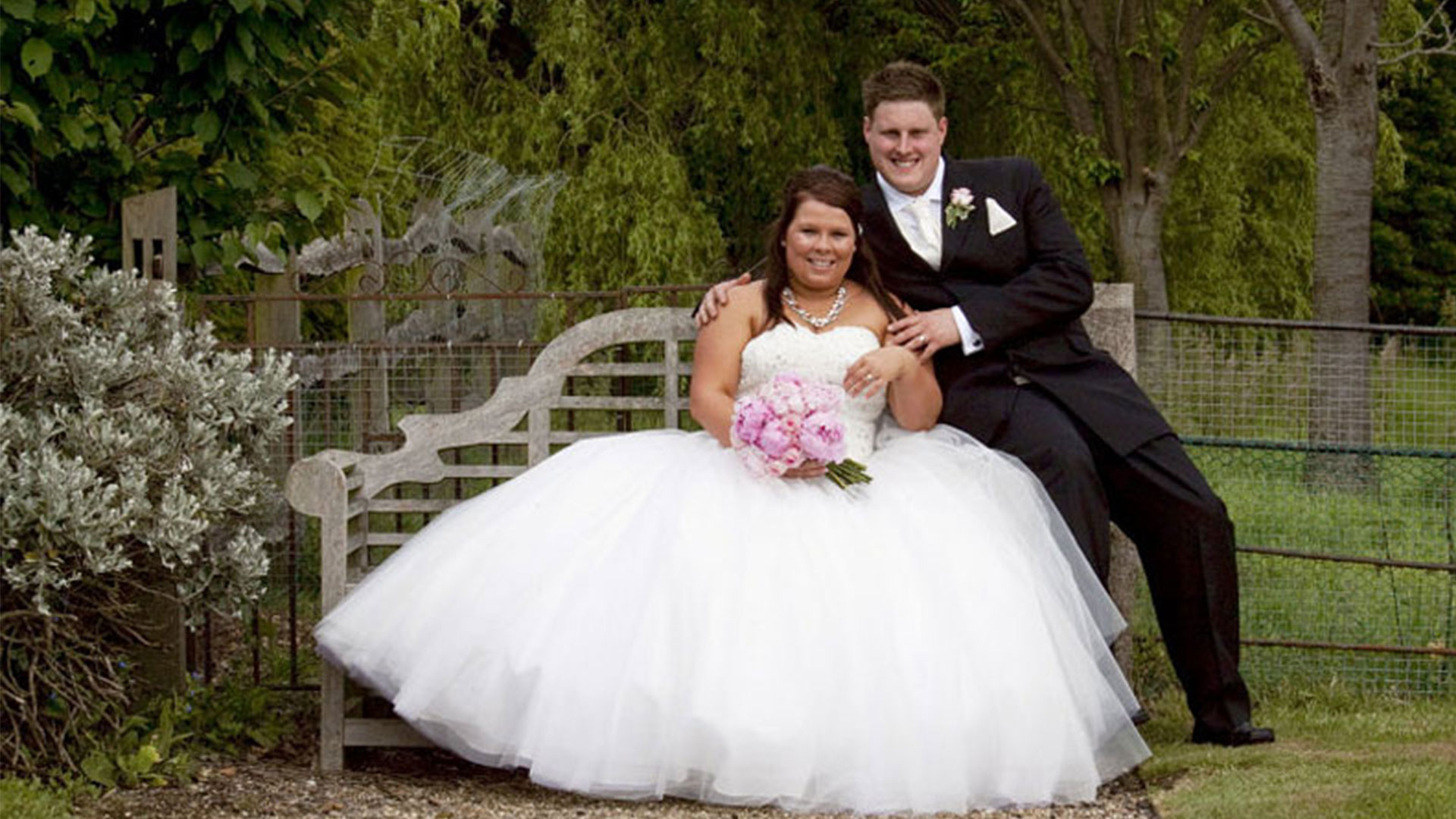