After meeting at a house party five years ago, Tom popped the question during a Christmas holiday to Bologna, Italy. It was snowing there and freezing cold but very beautiful. After dinner one night, we took a stroll through the city and found ourselves looking at Neptune’s Fountain in a large square near our hotel. There were Christmas trees and lights and icicles! I was looking at the fountain and when I turned around Tom was on one knee and asking me to marry him!

Lizzy and Tom loved Gaynes from the minute they saw it. They felt it had everything they were looking for and could imagine the day exactly how they wanted it right from the first visit.

“Gaynes Park is a beautiful wedding venue; the neutral decoration meant that although lovely on its own, we could also add our own unique ideas to the decoration for our day.”

Lizzy’s bridesmaids were her five sisters, Tom’s sister, and her best friend. A friend’s daughter was also flower girl. They each wore strapless chiffon and silk, long evening style dresses which gathered at the waist. They were a beautiful neutral fawn of ‘Palomino’ colour and had a sparkly floral motif, which complemented Lizzy’s dress perfectly. The dresses were by Impression and were bought from A White Wedding Shop.

Tom had a bespoke suit made from Moss Bros Bespoke. It was a dark grey single-breasted two button suit with paisley blue silk lining, with the wedding date stitched into the inside pocket. Tom also hired a pale grey/silvery waistcoat, cravat and pocket square. He chose his suit with the help of his best man and ushers. Lizzy says,

I didn’t get to see it until it was finished. I thought that Tom looked stunning in his suit – it’s not something he gets to wear often, and I organised a silver pocket-watch to go with it, which I gave to his mum to give to him as a surprise on the day.

Tom had one of his friends from Uni as best man and three of his oldest friends were ushers as well as Lizzy’s little brother. They all wore hired suits from Moss Bros.

We never really liked the morning coat look for our wedding so they all looked very dapper but simple for the day. They helped with organising guests on the day including getting them all on and off the coach from the Marriott Hotel. They also helped film various parts of our wedding using our hired Shoot it Yourself cameras! No easy feat! One of the Ushers, Martin, who Tom has been friends with since school, is a singer and sang one of our favorite songs after the wedding breakfast.

Lizzy’s dress was from Pronovias,  Bond Street branch from their 2011 Ball Gown Collection. It was a strapless v-notched Paris Garza gown with subtle but sparkly beading.

It was very vintage in style and absolutely beautiful! I wore an art deco style bangle with a mix of small and marquise style crystals and also crystal drop earrings both from Glitzy Secrets. My shoes were quite high peep-toe platforms with some sparkle at the toe, but I had them dyed a royal blue to be my something blue on the day! My something old was Tom, something new was my dress, borrowed were my guests and my something blue were my shoes!

Transport on the day was a coach hired from Momentum to pick and return all of Lizzy and Tom’s guests from where they were staying at the Marriott Hotel. The bridal party stayed at the Ivy Cottage B&B, which was fabulous, and Lizzy’s Mum drove Lizzy (in a nightie and rollers in her hair!) to Gaynes Park an hour before the service!

Lizzy and Tom’s original idea was to have a very fancy wild garden tea party theme; very natural and neutral with lots of colour coming from the natural foliage and willow.

Once I got my dress -which was much fancier than I thought I would pick! – we wanted to add a little bit of glamour, hence the red carpet and drapes. This gave it a very enchanted woodland feel to it all!

The Mill Barn at Gaynes Park was decorated with pink uplighters and a ‘Mr & Mrs’ gobo, a fairy light chandelier and drapes from Wedding Creative hung from the centre of the ceiling and down the four pillars in the barn and fairy lights floor from Imaginations Event Services hung in the disco area with a black and white dance.

The table centrepieces by Stacey Stevens were very tall willow, moss and ivy bases with large natural arrangements of various white flowers and natural foliage. They had tea lights suspended from them and in the evening they almost looked like they were floating.

We also had the large flower arrangements from the ceremony room placed on either side of the entrance doors plus a large arrangement on the top table with ivy and moss running either side of it along the table. We had a special heart-shaped sign with ‘Love is all you need’ written on it and suspended it from the arrangement to hang over the table. There were also lanterns with tea lights lining the entrance to the Mill Barn.

As a special touch on the day, Lizzy and Tom had a picture designed of themselves and placed in an autograph frame. It was a retro comic book-themed cover with the both of them styled as a ‘mad doctor’ creating the perfect superhero groom with the perfect ring (Green Lantern is Tom’s all-time favourite comic!).

This was something we wanted to do to make our day personal to us – especially Tom who is a huge geek! We also had pictures of my parents and grandparents on their wedding day displayed, which was a last minute addition to remember my Mum’s father who had unfortunately passed away a few weeks before the wedding and had so been looking forward to it.

The long walk outside was decorated with pomanders on shepherds’ crooks with lots of willow and natural foliage. Lizzy and Tom also decorated the venue with signs that they’d ordered from a supplier on Ebay.

The lovely staff dotted the signs around the Orangery and we also had pictures of my grandparents at their weddings and my parents wedding in frames as well as a lovely mosaic ‘LOVE’ sign from Cornwall.

We also had eight smaller cakes in different flavours for special people making up the bottom ‘fourth tier’. We also had a lemon side cutting cake.

The most memorable moment of the whole day for me was being a little bit tipsy and half stripping Tom on the dance floor to ‘Sexy and I Know It’, much to the delight of everyone but him! Not exactly romantic but hilarious and memorable none the less! Overall everything was perfect and I wouldn’t have changed anything!

Budget – we found it’s important to make sure you spend your budget in the right places. Look around for things on Etsy or for small independent artists. There is so much talent out there with much more enthusiasm and creativity than corporate companies who mass produce ‘wedding’ style products that have no uniqueness. We made a huge effort to personalise everything and we still spent roughly the same as if we’d ordered everything from a big company. It paid off in the end. Don’t just settle, look around and negotiate until you get something you’re 100% happy with.

“Don’t just settle, look around and negotiate until you get something you’re 100% happy with.”

Lizzy and Tom stayed in a luxury cabin in Kettlbly Lakes near Melton Mowbry.

We had our own private hot tub and sauna! It was the perfect end to all the stress from planning the wedding. 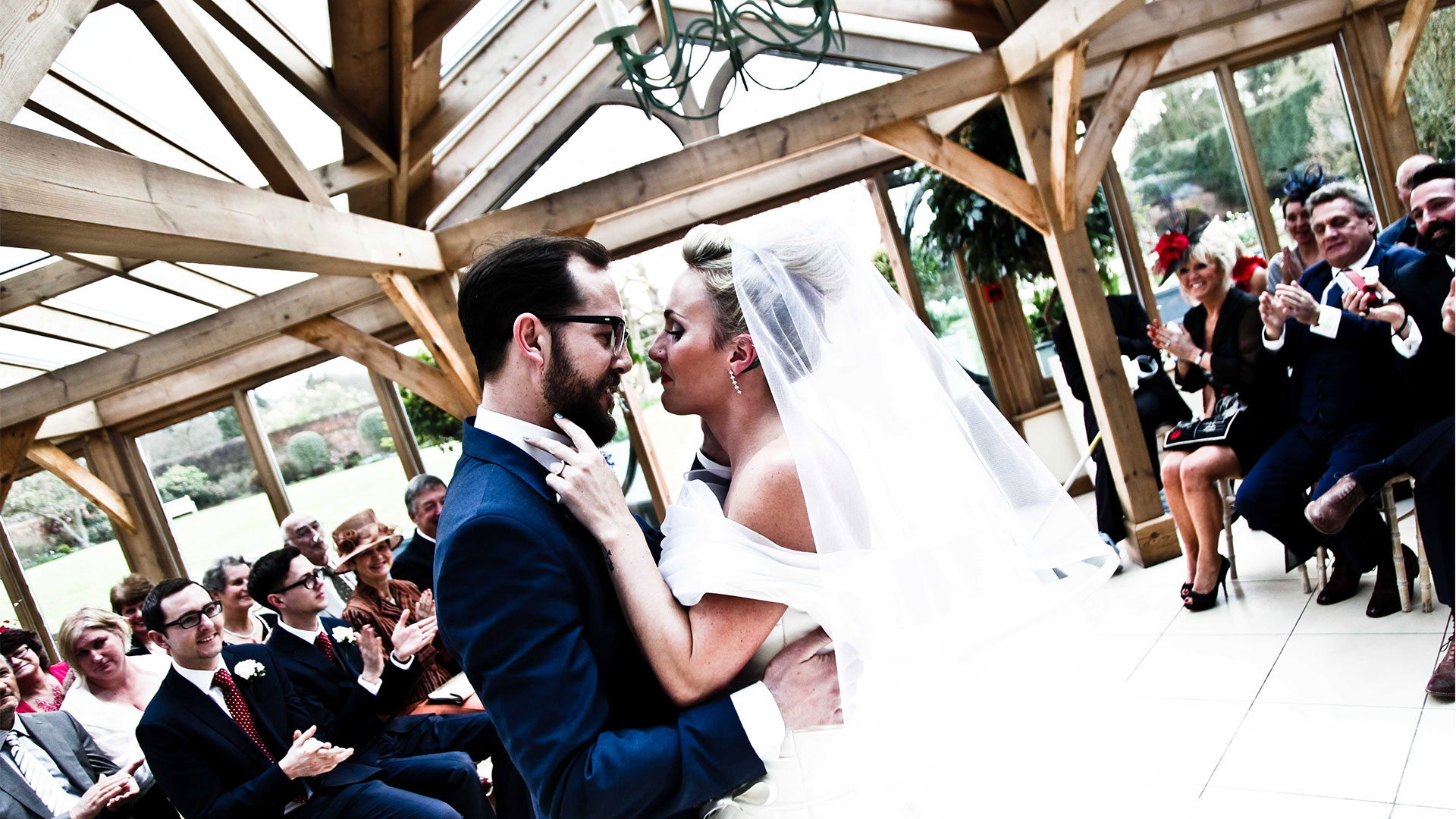 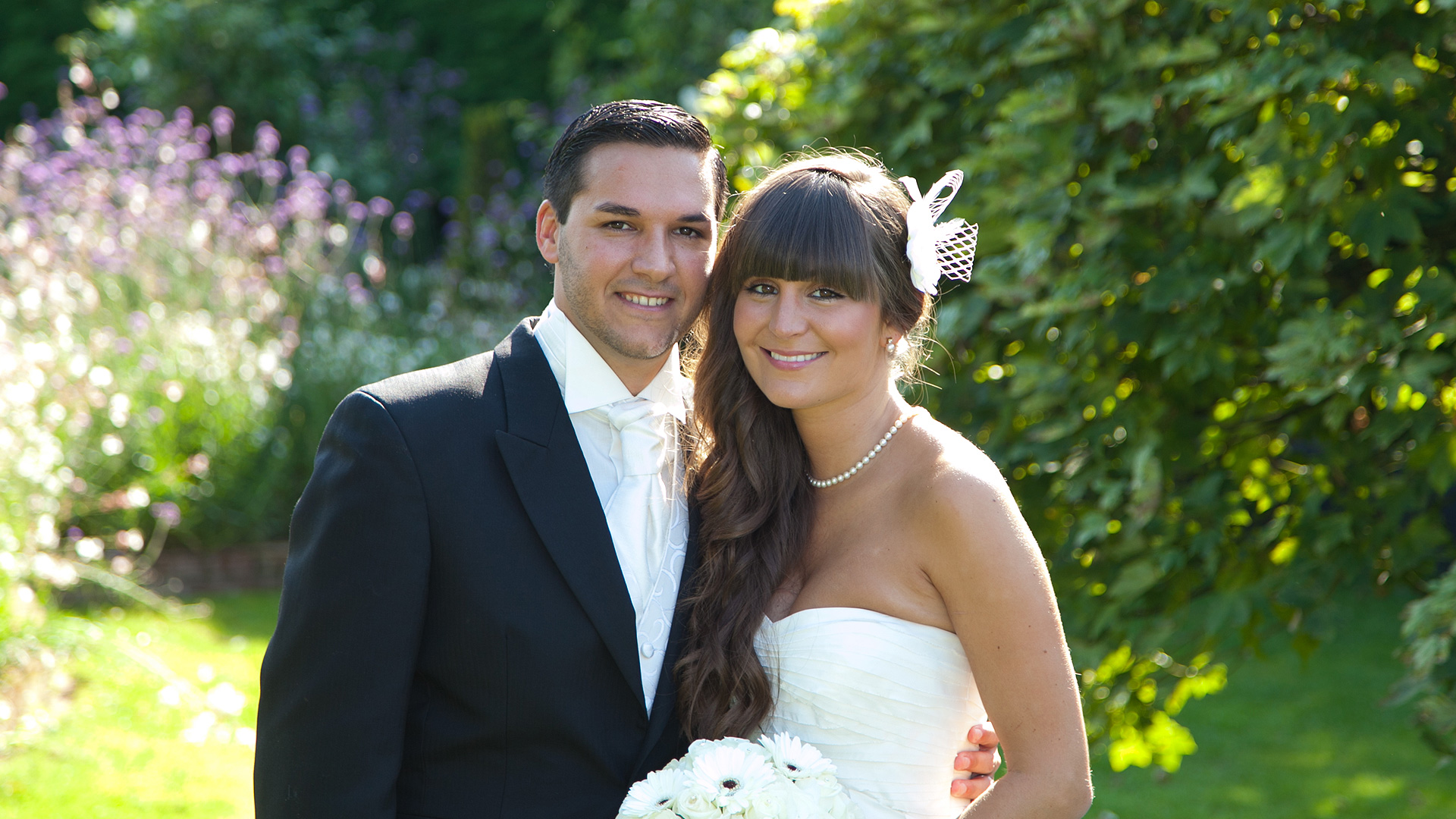