Kar-Sin wasn’t expecting Mark to propose because they were just about to move house and had a lot of things going on. Because of completion dates and a chain in the buying process, they’d both had to move back in separately with their parents and were going to spend a while apart. A couple of days before we were due to move, Mark was talking about being apart and how much Kar-Sin would miss him. The next thing she knew he was down on one knee.

The first thing they did was look for a venue. Kar-Sin already knew she would love to get married at Gaynes Park; it just depended on dates and finances. As soon as they drove up the drive to the venue Kar-Sin just knew she and Mark had to get married there. Kar-Sin told us, “Gaynes Park was the only venue we visited and looked at. We had the day off to pick up our new house keys and begin our move into our new home, so booked in to have a visit to Gaynes Park in the morning. We fell in love with it straight away. As soon as you drive up that driveway, there is a feeling that you cannot describe. It’s a special kind of feeling which just makes you smile”.

After their initial visit, they called back that afternoon and booked their big day.

Kar-Sin and Mark chose a ceremony at Gaynes Park in the amazing Orangery. Kar-Sin explains they were lucky with the weather: “It poured with rain about half an hour before the ceremony and as we were about to leave the cottage to walk down the aisle it stopped. My dad walked me down the aisle, and it was just an amazing feeling.”

“The Orangery is so bright and airy that it felt like a summer’s day… The amazing part of it was when the registrar announced us as husband and wife and the sun broke through the clouds; a very magical and memorable moment.”

Decorating Gaynes Park for a wedding

Kar-Sin and Mark wanted their wedding to have some tradition and culture to it. Mark being Scottish and Kar-Sin being Chinese, they wanted a mixture of the both. On their wedding day, there was ‘Cameron’ tartan dotted around subtly, and Kar-Sin wore a traditional Chinese red wedding dress and performed the tea ceremony. Kar-Sin explains; “This was very important to me as the tea ceremony symbolises respect and thanks my parents for everything that they have done so far in my life. I was very lucky to visit Hong Kong in February just before the wedding to purchase my Chinese dress, which was custom made.

The Cameron Tartan ribbon was on all the handmade wedding invitations, bouquets, buttonholes, cake, table numbers, and even the Thank You cards. I wanted everything to tie in and for a part of us to be an element of the wedding from start to finish”.

‘Cameron’ Tartan is mainly red. As red is a lucky colour in Chinese culture, they decided it would be our colour theme. Mark is a Spurs fan and there was a couple of conflicts, however it all worked out well on the day.

A lot of Kar-Sin and Marks’ wedding suppliers were local. The cake was made by someone Kar-Sin used to go to school with, and the flowers were done by a family friend. Both suppliers had worked at weddings at Gaynes Park before, which was a big plus, Kar-Sin says, because they knew where it was and knew about the set up on the day.

Mark doesn’t particularly like having his photo taken, and they wanted a photographer who wasn’t going to be too expensive, but would capture some great shots. A friend of theirs recommended Nigel Read Photography; a local photographer who’d also worked at Gaynes Park before. Kar-Sin says this worked out very well for them, and the photographs are amazing.

Kar-Sin originally wanted a strapless dress that was straight across the top with a waterfall-effect bottom. She had a picture of parts of the dress I had in mind and went to visit Peaches in Harlow. After showing the girls in the shop the picture, they picked her out a dress.

Kar-Sin tried on three and found the ‘One’ pretty much straight away – the one the shop assistants picked for her. Kar-Sin says, “I would never have picked the dress as it is very different, but the dress looked beautiful on and made me feel amazing.”

Kar-Sin found her wedding jewellery while visiting family in Hong Kong. She had three pairs of shoes for the big day including flats. She bought one pair of ivory shoes from Coast and a pair of lovely velvet red shoes online for the tea ceremony. Kar-Sin’s flats were from Pure and Precious to which she added diamantes to for a bit of character.

There were problems with the headband of Kar-Sin’s tiara. She found it stood out too much and pinched the side of her head. In the end, Kar-Sin snipped the metal headband off and attached the jewelled part to a metal comb. This made it so much easier to take off and put her hair up on the day.

Mark wanted to wear a kilt in Cameron tartan, and they found it very difficult to find one. Instead, Mark settled for a navy herringbone three-piece suit. He and Kar-Sin searched the internet and found great bargains from Formally Yours.

Kar-Sin had three bridesmaids. They all went to a bridal shop and tried on a number of different dresses. Kar-Sin told us, “I let the girls choose what they wanted to wear as I wanted them to be comfortable on the day.” Her bridesmaids chose long floaty chiffon dresses and flat sandals.

Kar-Sin was able to get the dresses cheaper online. She explains, “After some research we found exactly the same dresses for half the price and the bonus was I could measure the girls and have them custom made. The dresses turned up, and they were perfect”.

Kar-Sin and Mark wanted something a little different for their wedding meal: “Many like to choose the safe option of chicken as they know everyone will eat it. But we knew Gaynes Park would deliver on their food. So we chose a crispy duck salad to start; fillet of beef with dauphinoise potatoes and green peppercorn sauce for the main, and jelly and ice cream for dessert. We choose jelly and ice cream for something a bit lighter and fun after the two heavy meat courses”.

Kar-Sin and Mark loved their whole day so much, choosing just one thing proved impossible. Kar-Sin told us, If we could do it all again, we’d do it in a heartbeat (minus the cost though!). We wouldn’t change a thing as the day was just perfect. Gaynes Park made it magical, and we will cherish our memories of an amazing day.” 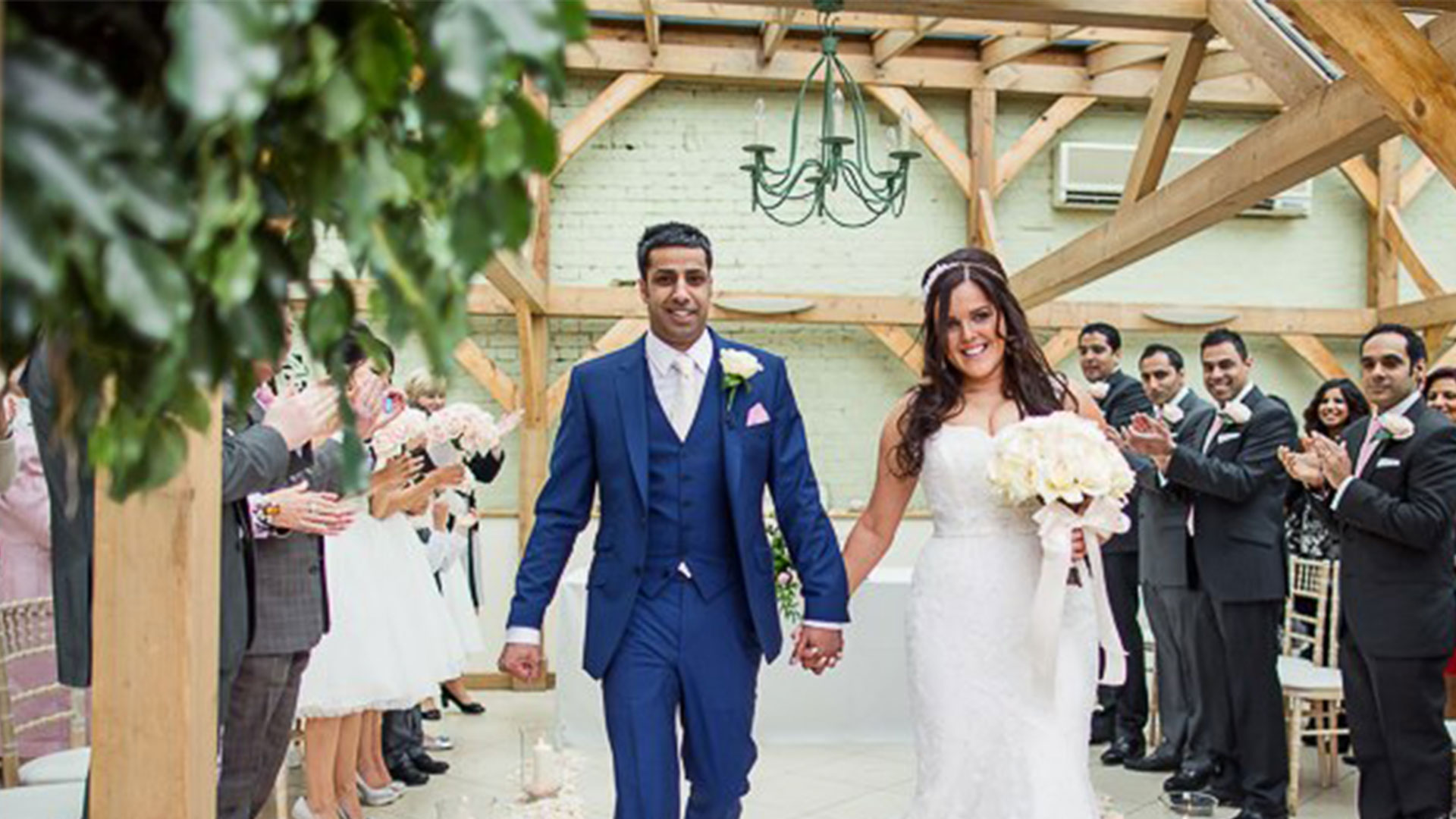 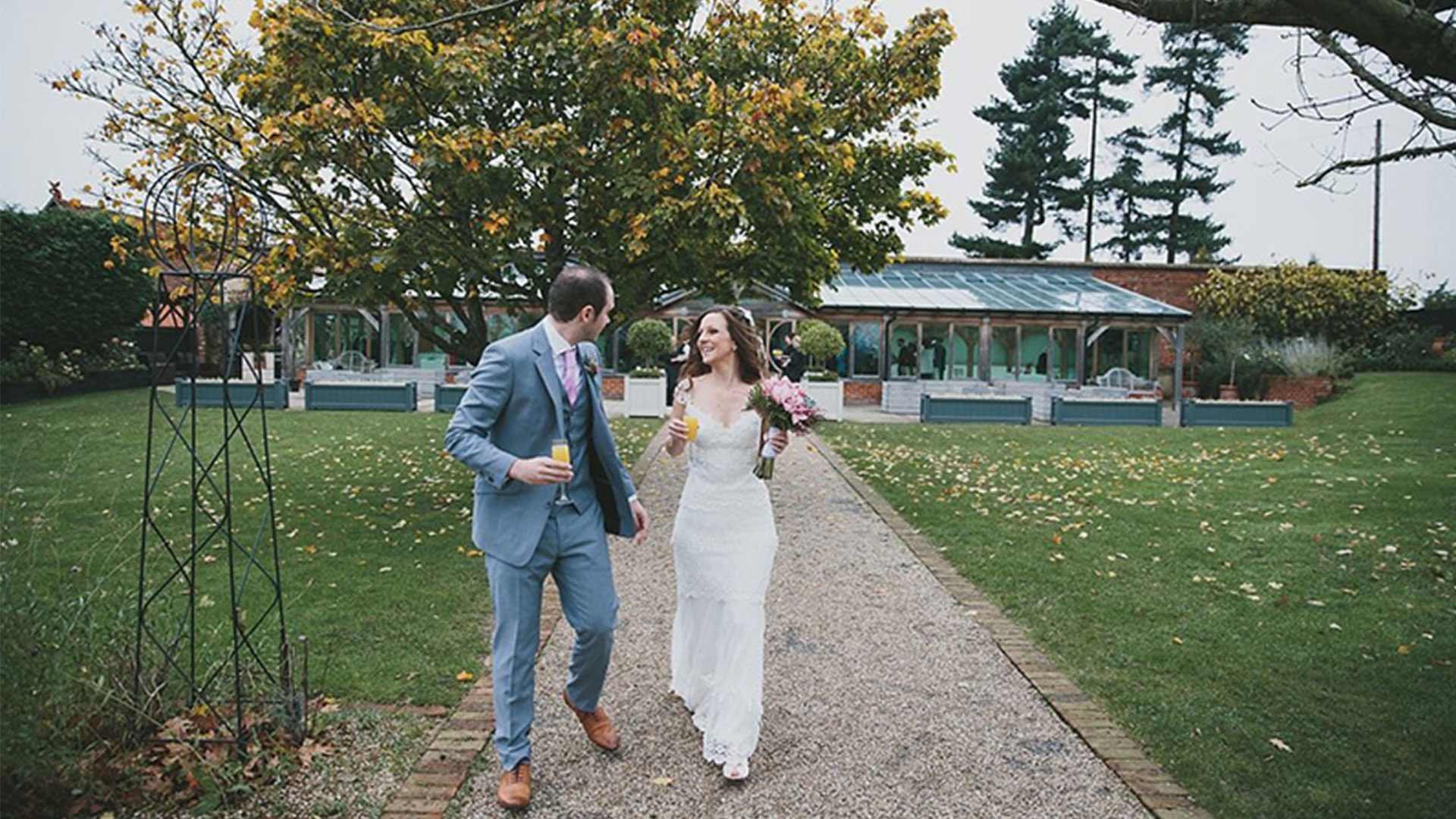