After nearly four years of dating, Nick thought it was about time that he popped the question to girlfriend Joanna. Having decided on the ideal picnic proposal at Hampstead Heath, in London, Nick just needed to wait for the first sunny day of the year. “While the plan was to propose in the park, the quiet moments kept being interrupted by dogs, dogs chasing swans, all sorts… so I decided to propose when we got home,” laughs Nick. All the couple’s friends knew of Nick’s intentions and once the proposal had been announced, they joined Joanna and Nick for a champagne celebration.

A Place for Lovers

Finding the perfect wedding venue for their special day wasn’t hard. The pair only visited one – Gaynes Park – and fell in love with it straight away.

“We made up our minds instantly. It was so emotional viewing Gaynes Park, I was picturing our reception in the Orangery and I knew the gardens would look just beautiful at an autumn wedding. It had everything you could need in one place.”

Initially, the couple booked a Friday but later changed it to a Thursday wedding to save some money. The date they booked happened to be Halloween, and while this initially put the pair off, they decided to embrace the festivities with a few subtle and pretty touches. “When I met Shrinking Violet, our florists, at a wedding fayre they got quite excited about stencilling pumpkins – so then I started to love the idea of subtle Halloween touches,” says Joanna. The couple teamed the theme with dusky fall colours in purples, pinks, silvers and greys and accessorised with hanging signs and woven wooden hearts for a rustic touch. “On the tables we added jars of flowers, keeping things simple. Our local green grocers also saved us loads of miniature pumpkins which we painted white and stuck the table names in with a wooden stick,” explains Joanna.

To match their pretty palette, Joanna and Nick opted for a Battenberg wedding cake. It not only reflected their colour scheme, the cake was also Nick’s go-to dessert. To give it that wedding touch, their baker added a touch of ivory icing and the couple made their own copper topper, shaped to their initials. They also scattered flowers around the edges to match the bouquet.

While the couple’s wedding venue and theme came together relatively quickly, finding the right dress proved to be a little more difficult. “I tried on quite a few gowns and wasn’t really taken by any of them. Then I found Claire Pettibone’s Kristene dress online and went to Blackburn Bridal especially to try in on. When I didn’t want to take it off I knew it was a sign,” smiles Joanna.

To match the 1920s style of her dress, Joanna wore a bespoke lace and pearl headpiece, made especially for her day. As her dress was very detailed, she opted for minimal jewellery and finished off her look with satin peep-toe, 1920s style shoes. Joanna’s bridesmaids complemented her look with dark green/grey Jenny Packham dresses from Debenhams and nude peep toe shoes from M&S. “I asked my three oldest and closest friends to be bridesmaids and we were keen for each of them to show off their personality. Instead of wearing the same jewellery and hair style, they each chose their own,” explains Joanna.

Joanna and Nick got married in Gaynes Park’s Orangery. For Joanna, walking down the aisle with her Dad and spotting Nick waiting is her fondest memory. “We can’t remember another time that was filled with so much happiness. Being surrounded by all your closest family and friends is just wonderful,” smiles Joanna.

To celebrate their nuptials, Joanna and Nick began with a mojito reception – reminiscent of all the mojitos they enjoyed in Cuba where they met. For the wedding breakfast they had Scotch egg for starters, duck for the main course and lemon posset for dessert. “We decided for a more informal setting at dinner and sat our parents, bridesmaids and best man on a round table with us, rather than at a top table,” explains Joanna.

The party started with Joanna and Nick’s first dance to Walking After You, by the Foo Fighters, and carried on with all the couple’s favourite songs, played by live band The Rockpins. “We tried to practice our dance in the week before the wedding, but half way through the practice Nick wandered off to eat apple pie and I started sampling my new wedding perfume. Needless to say the dance wasn’t practised and wasn’t the highlight of the day but we love the song and it will always be memorable now,” smiles Joanna. 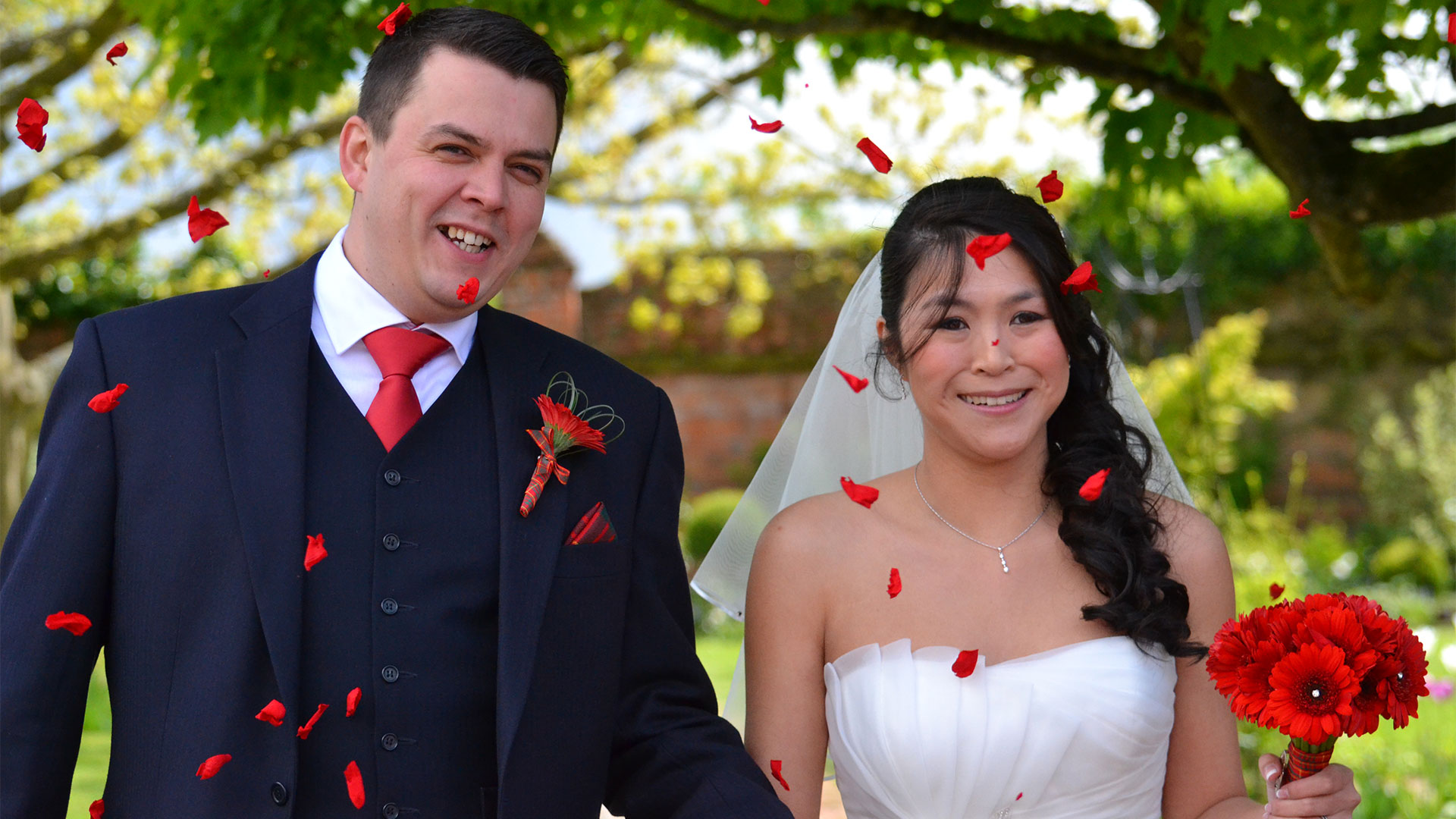 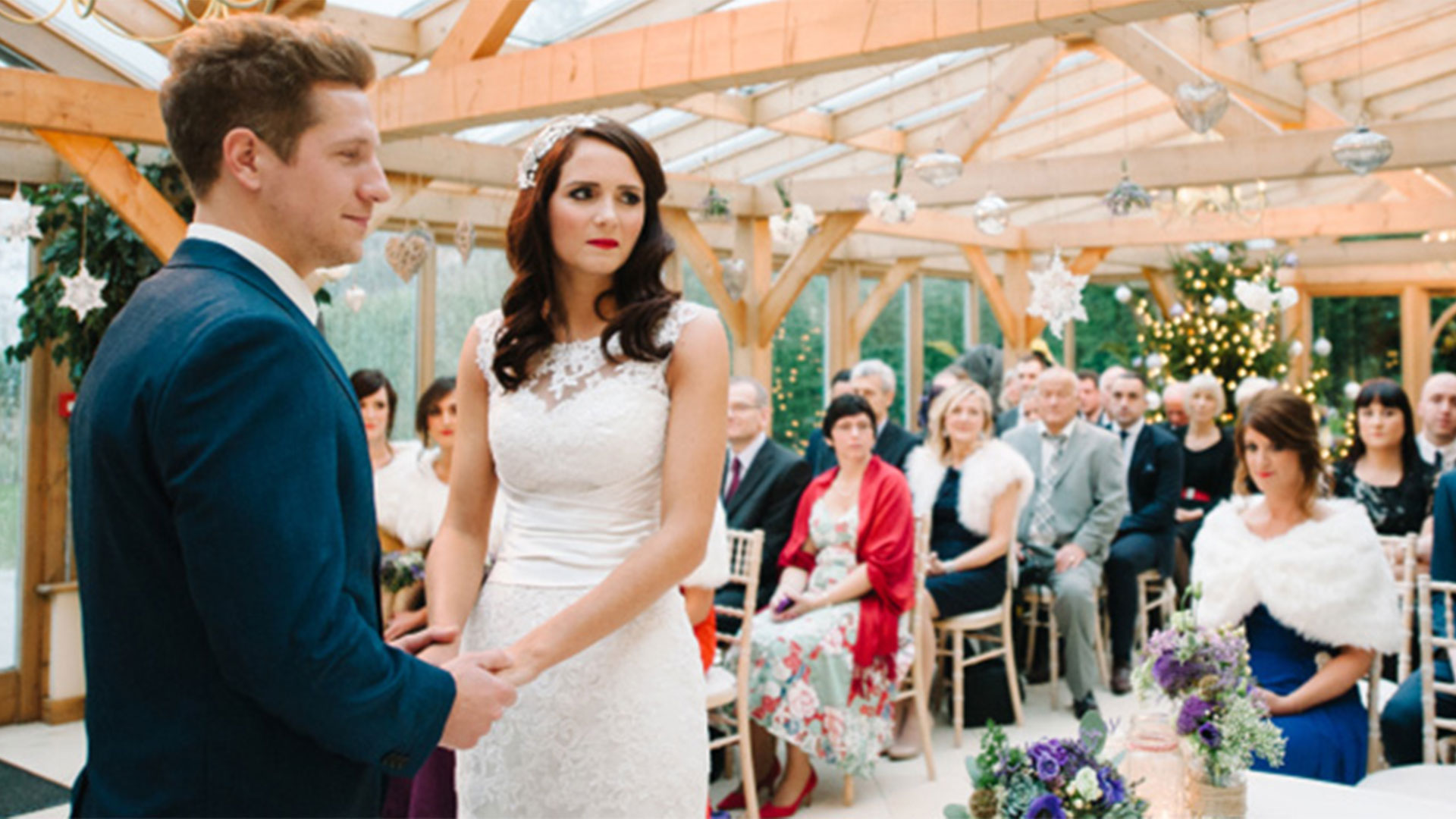