Rachael and Luke chose to have a farming theme as Luke is a farmer. The style was soft, which was helped by using sepia tones.

Rachael and Luke looked at a couple of other wedding venues, but none of them had the warmth that Gaynes Park did. They loved it the moment they saw it. Rachael thought the gardens were beautiful and would lend themselves very well to her grand entrance. The couple fell in love with the old red brick walls and wooden beams in the barn and had no doubt that this was the place they would get married.

We booked really late, in the February, (we got married in October) and we couldn’t believe no-one had already taken the date as it was so special! 10-10-10 or in Roman numerals XXX. We later found out this date is also known as the day of the bride and would be lucky for anyone getting married that day. How right they were! The sun shone like the middle of August (better actually) and we had blue skies all day. We wanted to get married in October as the trees and leaves are so beautiful that time of year so we thought even on a dull day the pictures would look great. We chose the 10th because I thought there was no way Luke could ever forget the date 10-10-10!

The adult bridesmaids and the maid of honour all wore dusty pink, chiffon dresses from Monsoon. They were strapless with a calf length handkerchief hem.

I chose not to wear a veil as I also wore a very long, ivory satin-lined, moleskin cape with a deep hood and a white fox fur edge. It was imported from America. My “shoes” were white wellies with fur tops!

Rachael and Luke used fake flowers to decorate the barn, but no one knew as they were unbelievably realistic.

I bought them all loose then arranged them myself. We chose fake flowers so they would be exactly as I wanted, wouldn’t weep or wilt on the day and they would continue to look great forever.

Rachael’s bouquet was long and full with roses, peonies, thistles and greenery all in the same antique theme. The bridesmaids each carried a single oversized cream rose with cream pearls on.

Luke travelled to the venue in his blue tractor with his best man, Paul. Rachael made her entrance riding her horse, Mia, side saddle down the path in the walled garden.

Rachael and Luke chose cream china Sia cake stands as their centerpieces and dressed them with pink rose garlands and fairy lights. The table numbers were in the middle of each cake stand in tall antique silver swirly stands.

We were very organised with the decorations and had loads but didn’t know how to dress the room. Fortunately, the Events Team at Gaynes Park were absolute life savers and dressed the rooms beautifully.

Each guest was given a small glass heart shaped bottle with their name on it and the date of the wedding. Each one was filled with sloe gin made by Rachael.

The cake was a copy of Luke’s tractor with Luke and Rachael sitting on the bonnet with their two beagles, Lucy and Toby, (who couldn’t be there on the day as Lucy had just had puppies).

We also had mini Battenberg cakes stacked like hay bales with miniature pitchforks that said “Thank You” on them.

There were so many – Saying “I do” and seeing Luke waiting for me was very emotional. I absolutely loved everyone watching me ride Mia down the aisle. She was amazing and it was absolutely magical. It was a very proud day.

Our first dance was great too – we danced to Taylor Swift Romeo and Juliette. It started off slow, then the bridesmaids came round me and unzipped the bottom half of my dress so it was calf length (I had the zip put in professionally!) and we carried on. It was great!

Don’t stress! Plan well in advance and do as much as you can before the big day. Everyone kept saying they couldn’t believe how calm I was, but I think it was because all I needed on the day was for Luke to say “I do” and there was never any doubt about that. Everything else is just a piece of a puzzle that will fall into place. Don’t get bogged down in what is not important. 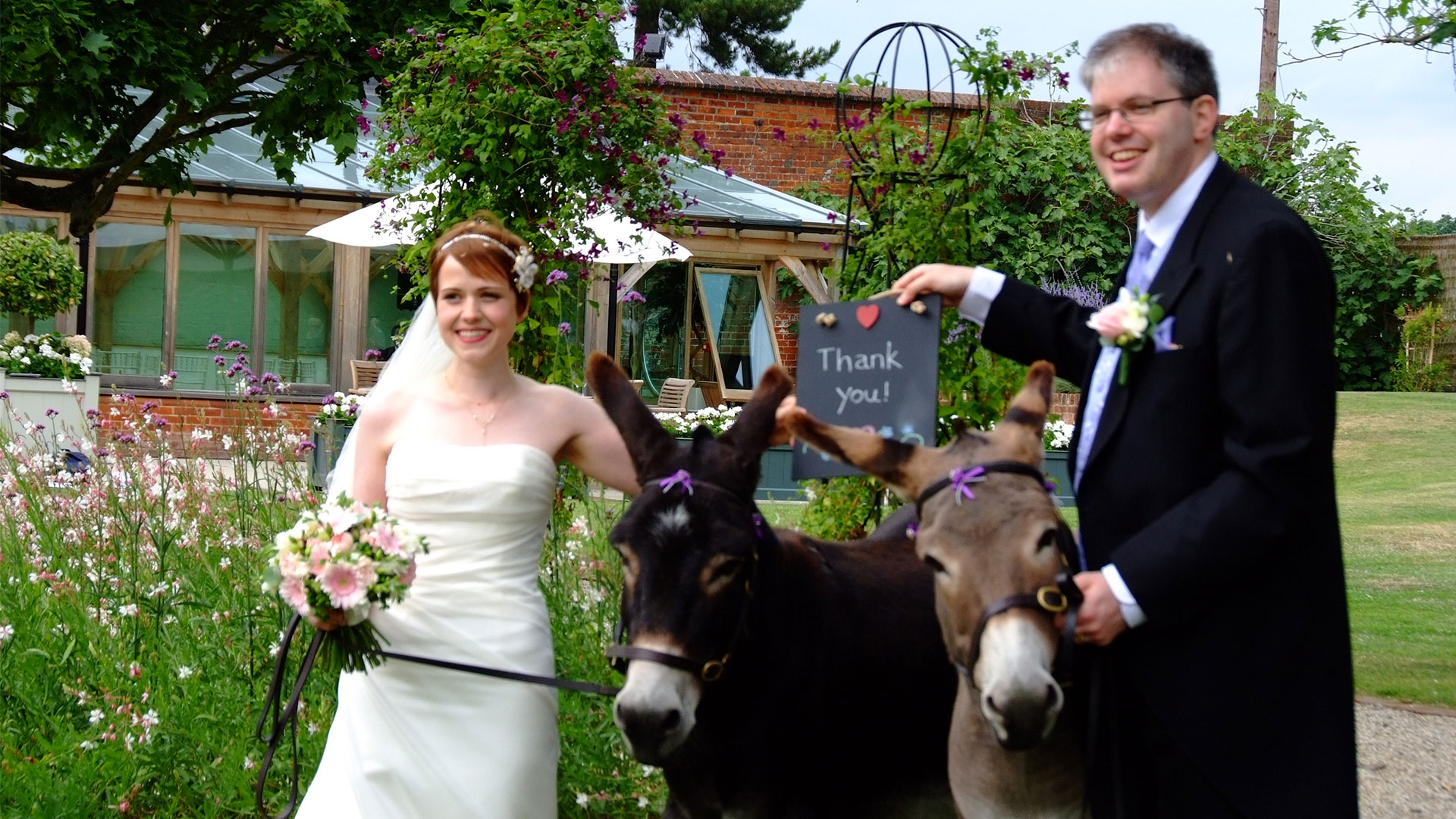 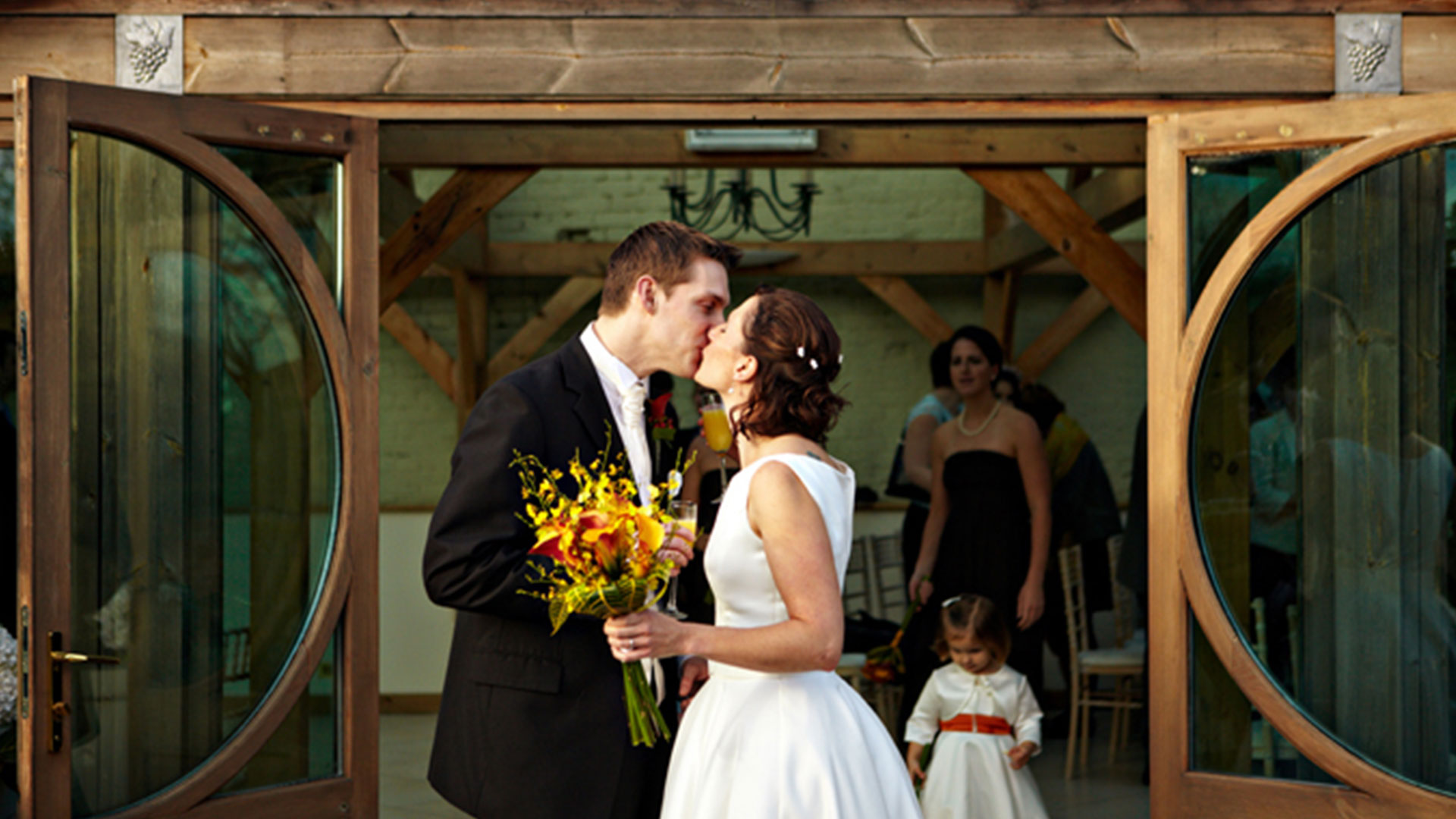